Goldfields Visits a Centre for the Disabled 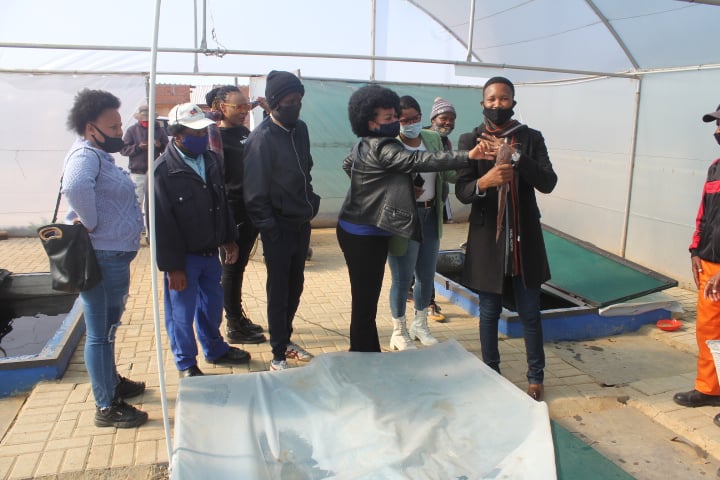 THE COLLEGE VISITS A CENTRE FOR THE DISABLED TO LEARN ABOUT AQUAPONICS FARMING AND HOPES TO ESTABLISH SUCH PROJECT IN THE FUTURE.
According to a 2014 report by Statistics South Africa, based on the 2011 census, 7.5% of the country’s population is regarded as having a disability of some sort. The highest proportion of people living with disabilities, by the province, was found to be in the Free State, with 11,1% of its population having such people.
Last week Thursday the Student Support Services and Academic Department officials flanked by the Student Representative Council paid a visit to the Tshwarahanang Centre for the disabled, situated in Phomolong-Henneman. The centre is established under Disabled People for South Africa. DPSA is an organisation which has been in existence for over 36 years and was launched in the Free State in 1992. The purpose for its establishment, is to advocate and lobby for recognition of the rights for the people living with disabilities in South Africa. It was thus established in line with all the Legislations and International Treaties prescripts.
The purpose behind this visit is for the College to gain thorough knowledge on disabilities, and to further explore different subjects on different disabilities affecting the College students and not limited to the officials. In turn, the College hopes to motivate and encourage the students particularly the ones living with special needs. With this purpose, the College hopes to find ways to increase motivation for such students. As we believe that this will allow the College to change the behavior(s) and develop the talents of these students. Allowing these students to be creative, goal oriented, grow interest in diverse learning fields, and plan their future thoroughly. We hope that this will develop their different talents and that their confidence is boosted in the process, in order for them to engage and contribute effectively in their communities.
Since DPSA lobbies for the inclusion of people with disabilities in every aspect of life: such as education, business, employment, health services, among other aspects. The organisation saw it fit to establish permanent employment at Tshwarahanang Centre. There are currently 5 permanent staff members with special needs who are employed at the centre. The centre has two sites, designated for the blind/partially blind community members and the other site is for community members with different disabilities. The former specialises with artisanry work such as welding, electrical and electronic work while the latter specialises with seaming. The two sites have in the recent past worked on very successful projects in response to Covid-19. Government departments were able to procure sanitizing machines and cloth masks from the Centre. This is an achievement that DPSA and Phomolong community members find impressive, and are very proud of.
However, the crux of Tshwarahanang Disabled Centre is the Aquaponic Farm which was founded in 2015. Messieurs Ernest Nyembe and Gomolemo Mpopetsi who are DPSA officials, inform us that the plant at Tshwarahanang is one of the 3 plants established in the Free State. The other plants are situated in Wesselsbron and Kroonstad, and each plant which is about 20 x 20 metres, cost approximately R 380 000.00 00 to erect.
Aquaponic farming is a combination of aquaculture, which is growing fish and other aquatic animals, and hydroponics which is growing plants without soil. These beneficial bacteria gather in the spaces between the roots of the plant and convert the fish waste and solids into substances that the plants can use to grow. Although the plants (vegetables/ fruits) that grow from this type of farming are not classified as organic. They are 100% healthy and have equal the nutrients that organic plants have, as opposed to plants that are grown with chemical fertilizers.
The College as the proponent for green economy, actively seek to understand natural capitals as critical economic assets and sources for public benefits. We do so because we believe that the Colleges are an answer to address the plight of South African artisanry development; especially for disadvantaged communities whose livelihoods depend on natural resources to make life a little easier, by using renewable energy from the sun to make electricity. Which is a component that is used in Aquaponic Farming. The College will consistently seek to contribute and support green economy, by teaching both our students and officials the benefits of being environmentally friendly, and how this can improve general lifestyles economically.
Horizons look promising for both the College and Disabled People for South Africa, as plans to actively engage on possible partnership is underway. This will be done to ensure that there is effective communication within the College to promote and integrate disability education in the College curriculum. Increasing disability representation in College committees and to encourage employment and business opportunities for people living with disabilities.
In conclusion the College will ensure that it encourages and supports the DPSA’s mission that people living with disabilities are not treated as second class citizens in their own country.