A fighter is someone who rises up, even when odds are against them 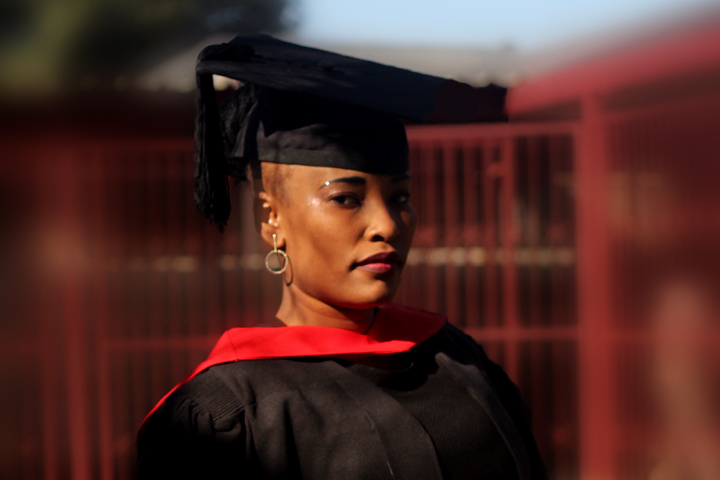 The adage quoted above plainly designates a story of young woman by the name of Juanita Letsoara, a former student at Goldfields TVET College who was born in the early 90s in a small town of Bothaville-Free State. Juanita unfortunately lost both her parents untimely. She firstly lost her mother in 2006, subsequent to that, her father passed on in 2010. After being unsuccessful in her matric studies, she then stayed at home for a period of 2 years. Coming from a very religious background, it was during this time that she realised that she had to do something with her life and remembered that she was raised way better than a defeatist she had become.

In 2012, Juanita made choices and decisions that she now marvels at and is extremely proud of! She enrolled for a National Certificate Vocational NC(V) Hospitality Management Level 2 with the College. Her choice for the programme was significantly inspired by her late father who was employed in the Culinary Industry for as long as she can remember. During her 3 years studies at the College and being the top achiever, she became more aware that enrolling for Hospitality Management was the best choice she made. Juanita is forever grateful for the support, knowledge and inspiration she received from her lecturers, in particular from Ms Nompulelo Lekhuleni,  whom she says ensured that she  is kept motivated and focused at all times.

Moreover, Juanita acclaims her success from other people including her sister Tseleng Letsoara and the former MEC of Sport Arts and Culture -Free State Ms Mathabo Leeto who both ensured that she completes her studies at the College.

After completing her NCV level 4 at the end of 2014 with record time, She then joined the Hospitality Industry at the beginning of 2015 as a Banqueting Assistant at one of the local hotels in Welkom. However, this was not part of her plans and objectives since her initial dream was to become a Pastry Chef.

It was during the one and half years that she was employed, that for some reason, she discovered her talents, strengths and learned more about herself a lot better. She then essentially realised that being a Banqueting Assistant afforded her more opportunities such as providing courteous and professional service to the guests, assisting in preparation of food set-up, clean-up in dining facilities, coupled with assisting with supervision of banquets and other large-scale functions. This excited her as she found herself in the frontline, unlike her initial plan of becoming a fulltime Pastry Chef; which then she says would have jaded her rapidly. Since this was going to require her to be in the kitchen on a fulltime basis.

However, Juanita finds it unfortunate that she was unable to attend her graduation ceremony because of the current Corona Virus Pandemic. Nonetheless, she is very proud to be in possession of her certificate.

She however pronounces that she is hopeful that one day she will ascend the stage and graduate formally for other qualifications, for the reason that she has more plans to further her studies in the future. One of her immediate plans is to enrol for Post Graduate Certificate in Education in order to enable her to transfer her skills and knowledge to others who aspire to be in the Hospitality Industry!

Goldfields TVET College remains very pleased and proud with its alumni and wishes to encourage other learners who aspire to become one of us, that it is possible to triumph over many challenges that life can throw at any person, just like in the case of Ms Juanita Letsoara.

The College wishes to congratulate Ms Letsoara for being patient, resilient and persistent in life and wishes her well and great in all her future endeavours.